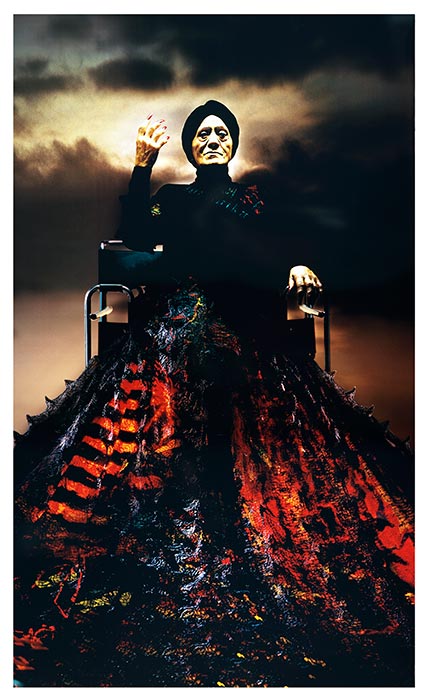 Lisa Reihana’s project Digital Marae is an ongoing conversation between the traditions of Maori marae carving and weaving with the use of digital techniques to create a modern visual language that honours the Atua and creates a space in which they can exist in a form outside of time on a continuum of past present and future. A digital marae with digital tukutuku panels, digital poupou, a whole digital wharenui.

Her large, singular portraits of import Atua are reminiscent of the carved poupou that hold up the roof, and the placement of her images plays around with conventions of both gender and importance of ancestors, determining their place within the wharenui.

In Devenport, R (ed) (2009) Digital Marae; Lisa Reihana. New Plymouth, New Zealand: Govett-Brewster Art Gallery. Reihana talks about the spiritual foundations of the marae and how she creates a welcome space within the wharenui by acknowledgement of the ancestors through the sacred karanga song;

“The karanga creates spatial form as the hosts and guests move through metaphysical zones of engagement.” (interview with Devenport, R. No page numbers)

The use of image, space and sound create an immersive installation space. I saw these works in Australia and found the size and luminosity of the works very powerful. There was a relationship between the atua and the human viewers through bodily connection – in my minds eye they were slightly larger than human, giving them an imposing otherworld quality. I appreciate the emergence of the figures out of the primeval darkness, the strong chiaroscuro effect and the richness of the colour and texture. I have always have an aesthetic fascination with the single figure portrayed in this way. They become a symbolic icon of an idea or archetype. It interests me how the Maori word ‘Atua’ is so similar to the word ‘Atu’; the term for the Tarot Trumps. Both are symbolic images that represent an archetype. I also see relationships to the work of Miria Kalman in the digital weaving; bright digital light, acidic, non-traditional colour, non-natural depiction of the weave.

There are certain Maori words I have picked up through my reading about Reihana’s work that I love;
ihi – powerful presence
wehi – awe
whare wanaga – house of esoteric learning

For me the images from Digital Marae with the most ihi are the 2 images where the Atua is facing front, is gazing at the viewer and has very little obvious digital manipulation.
Mahuika depicts an Atua who dwells in the underworld. She is fooled by the trickster Maui into giving him the fire that she carries at the tip of each finger (these powerful figures always seem to fall prey to the trickster!) Her dress smokes and runs with the lava of the underworld and her powerful gaze burns the viewer.

Dandy shows a rather otherworldly figure, dressed in the garb of the Victorian gentleman, who engages with the viewer directly. He is a representation of takatapui (the closest western term would probably be transgender or non-gender). Rhine wanted to recognise and honour this section of Maori society by including them in the esoteric ancestral pantheon.