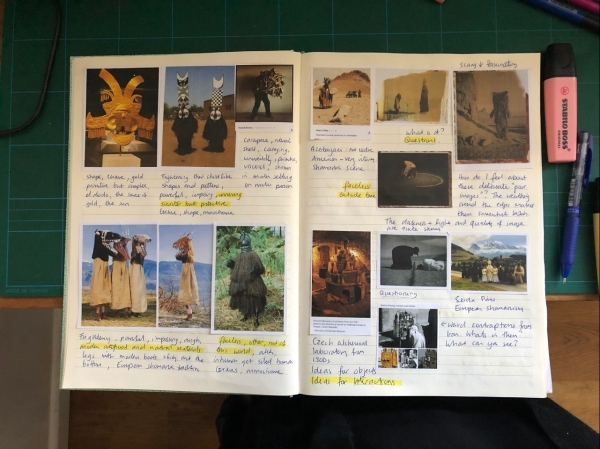 I constantly collect images that interest me, then several times a year I go through them, sort them into rough groups, stick them in my workbook and write notes on why I chose them underneath. From there I’m able to pull out possible areas of interest, recurring themes or ideas I hadn’t recognised before. I try not to self-censor and I keep anything that catches my eye even if I worry that it’s a bit far from ‘art’ or my practice as such. Fashion, pop culture etc can all have useful take-outs.

Just when I was getting into finding out about the contemporary Western relationship to esotericism and the occult, a friend sends me a selection of facebook screenshots he thought I might enjoy. I did enjoy it immensely, not just because peoples reactions are so great, but because it provided a nice little insight into exactly what I was curious about.

From digging around online I’ve come to the conclusion that a sort of vague ‘witchiness’ is very popular right now. As long as it’s got some connections to nature and you can indulge in some enjoyable consumerism in the form of sage smudge sticks or sliver pentacle necklaces, it seems reasonably acceptable by the (non-religious) western mainstream. I don’t think the same can be said for things that lean in a more ‘occult’ direction though.

What fascinates me is the fear induced by geometry; namely any geometry that appears in-situ within a building (one could almost say an installation). Ritual circles on the floor really get the blood pumping, then add a five-pointed star, or a hexagon, or similar and satan is on the loose! It’s quite wonderful that geometric shapes have so much power over otherwise jaded and skeptical adults. The excitement of finding a couple of circles under the carpet of an old house was so exhilarating that it migrated from facebook and onto the front page of the NZ Herald – I bet the owners didn’t expect that much curiosity! Is this the last real bastion of true superstitious fear in western culture?

I was thinking that you could perhaps chuck hauntings in there as well, but the reaction to ghosts vs floor-geometry does appear a bit different. Hauntings, as well as offering the exhilaration of fear, also offer answers; the possibility of an afterlife or existence in another place and the chance to connect with it. Occultism only puts forward questions. Find some fancy floor-geometry under your carpet and you’re just going to be left with more questions than you started with even if you can find someone to tell you what it is and who made it.

Just quietly, I suspect that either someone who lived in the house 30 years ago wanted spooky rooms for fun (bunch o goths) or there was someone who did some general non-specific ritual work and wanted a circle for it. There is certainly nothing in either of those circles that tells you much about what they might have been used for. I’ve included screenshots of the original post and some of my fave comments. These were shared on a public forum, but I have removed all names.

If anyone has any thought’s about contemporary western society’s relationship to the occult, please do leave me a comment as I’m very curious…

“To haunt does not mean to be present…”.
Derrida, J. (1994) Spectres of Marx: The State of the Debt, the Work of Mourning and the New International, Routledge, P161

I have a selection of quotes and thoughts around hauntology that didn’t quite fit in with the musical theme of my last post but which interest me in terms of my art practice. They examine the nature of the haunting; of the spectre; and what this means in a cultural, art or literature context.

In relation to ‘the spectre’, it is irrelevant whether one believes in ghosts or not:
“Spectrality does not involve the conviction that ghosts exist or that the past (and maybe even the future they offer to prophesy) is still very much alive and at work, within the living present: all it says, if it can be thought to speak, is that the living present is scarcely as self-sufficient as it claims to be; that we would do well not to count on it’s density and solidity, which might under exceptional circumstances betray us.”
‘Marx’s Purloined Letter’ in Ghostly Demarcations, p39

I found this quote useful in how it undermines the solidity and the very ‘realness’ of our present experience. Our belief in what is around us is unnecessary to the experience of that thing. What does it matter whether one believes in ‘ghosts’? A spectre still haunts us and affects our present. It’s very much inline with human experience of the ‘otherworldly’ – whatever that might be – in that it does not require fixed belief or rational processing for it to impact on the experiencer.

“Derrida’s spectre is a deconstructive figure hovering between life and death, presence and absence, and making established certainties vacillate. It does not belong in the order of knowledge…
Derrida calls on us to endeavour to speak and listen to the spectre, despite the reluctance inherited from our intellectual traditions and because of the challenge it make pose to them…
Conversing with spectres is not undertaken in the expectation that they will reveal some secret, shameful or otherwise. Rather it may open us up to the experience of secrecy as such an essential unknowing which underlies and may undermine what we think we know.”
Davis, C. (2005) État Présent Hauntology, Spectres and Phantoms, Oxford University Press, P4-5

I very much enjoy this concept of the spectre opening up an experience of unknowing which tugs unsettling on the frame work of what we think we know. The following quote expands upon that further by suggesting that the unknowing is only such because we are unable to articulate it using our current frameworks and language. This pushes experiencers to expand and explore the nature of articulating meaning – I love that idea.

“Abraham and Torok seek to return the ghost to the order of knowledge; Derrida wants to avoid any such restoration and to encounter what is strange, unheard, other, about the ghost. For Derrida, the ghost’s secret is not a puzzle to be solved; it is the structural openness or address directed towards the living by the voices of the past or the not yet formulated possibilities of the future. The secret is not unspeakable because it is taboo, but because it cannot (yet) be articulated in the languages available to us. The ghost pushes at the boundaries of language and thought.”
Davis, C. (2005) État Présent Hauntology, Spectres and Phantoms, Oxford University Press, P7

This haunting seems to me a phantasm of our potential or lost selves rather than a manifestation of anything even vaguely supernatural. Although that is not to say it is not ‘otherworldly,’ as the haunting itself is the product of another world that we expected, that we might long for but that has never come to pass. Linking in to my exploration of the ‘eternal moment’ I can see that the haunting is akin to a stuck record, endlessly repeating, measuring time in the static of it’s wear.