I was just reading this article The Biggest Art Trends of 2016 and having a chuckle at the predictions; Fake Clickbait is my personal favourite:

“The past decade saw the rise of news satire as a primary, viable source of news and information. As programs like The Daily Show, Last Week Tonight, and The Nightly Show grew in popularity, the general public became comfortable with “fake news” allowing sites like The Onion to explode in readership. So it should come as no surprise that the populous has reached the next level of meta-commentary. As everyone consumes gallons of clickbait from sites like Buzzfeed, another form of satire now has room to grow. Enter “fake clickbait”—especially ClickHole, from the minds behind The Onion—as a new form of acerbic social commentary. 2016 looks like the perfect storm for this trend, as a growing savviness from fake ‘bait creators coincide with a public quickly losing its taste for traditional, attention-grabbing clickbait.”

I do really enjoy the bevy of artists working within the realm of social commentary and societal reflection. NZ has Simon Denny documenting and re-presenting our cultural climate, and I briefly talked about Amalia Ulman’s instagram project “Excellences and Perfections” (2016) in my last post. Both of these artists are reflecting back at us without bias and without too much irony. I feel there is an honesty in the way they reflect on a culture that has become so self-referential and absurd that the general public still get tricked by satire news sites and re-share their ‘news’ stories with abject outage.

The concept of irony is in many respects a safety net, a way to protect oneself from expressing personal views in a manner that could be criticised. Hipster culture is constantly lambasted, viewed as fake and ridiculous. But perhaps it’s a way for youth culture to protect itself from inevitable mockery which, with social media, now comes from every angle? If you genuinely enjoy a type of music that is viewed as uncool or embarrassing isn’t it safer to maintain that you enjoy it ironically? No one can laugh at you for liking something ironically – it provides a protection and a shield from mockery. Earnestness maybe be the opposite of irony but it doesn’t negate humour. In many respects the ability to earnestly express a view and still accept that others might mock it shows an ability to laugh at oneself.

Being a teenager in the 80s the youth subcultures I was surrounded by were earnest, un-ironic, but still filled with self-aware humour. Subcultures such as punk and goth are often viewed as po-faced teen rebellion, but once past the teenage years when, lets face it, nobody has a sense of humour about themselves, those who identify with these subcultures happily embrace their perceived ridiculousness with good humour. It is basically the antithesis of hipster culture where fear of ridicule creates a veneer of detached apathy. I look forward to a post-ironic world where irony can be utilised as a vehicle for humour rather than as protection against ridicule. It’s quite liberating to be freed from the safety of irony. 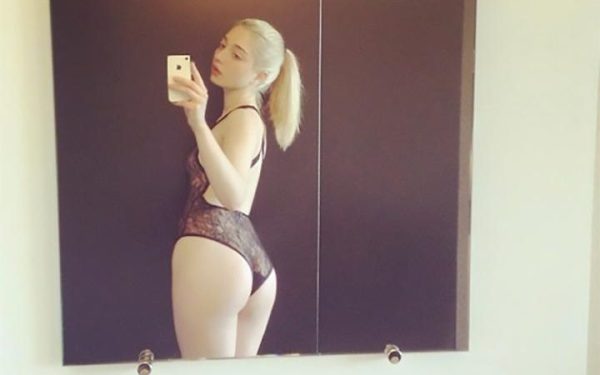 There is a new exhibition on currently at the Tate Modern called “Performing for the Camera”. I had a look through the works on display and it got me thinking again about some of the ideas I’d grappled with last year when making my first performative videos, as well as my dabble in live performance.

In my mind, the statements ‘performing to camera’ and ‘performing for camera’ are two very different propositions. The first denotes a connection with the camera (and therefore the audience behind the camera) that is likely to be realised through direct dialogue in some form; not necessarily speech or eye contact, but an obvious angling of the performance to the viewer. All actions are performed ‘to’ the camera – the audience is the camera. The second suggests the performer has an awareness of the presence of the camera and, therefore, of a potential audience. But the performance might not include any direct dialogue with the camera in the form of gaze, gesture or speech. A performer could quite well perform in the distance with their back to the camera and still be performing ‘for’ the camera. When creating my pieces last year I made the decision that the performances would be ‘to’ the camera. In Hive Oracle (2015), Sublimation (2015) and Albedo (2016) there is direct eye contact from most of the performers. Some performers in Albedo do not make eye contact with, or address the camera, but their pose and gesture is angled to the camera’s presence.

Working with performers I found many differences in the way still photography and moving image recognises tone and gesture. An expression that might be captivating in a still image becomes overwrought and overacted as soon as the image is moving. This is equally noticeable in my barely-moving tableaus which straddle the line between image and moving image. It was imperative for the work that I did not end up with performers who looked like they were Performing (capital P). I’ve seen this happen before with performers who, no matter what role they are taking on, are always, intrinsically themselves. In certain circumstances this is a strength, but it’s not what I needed for this work. Then the other side of the coin is hoping to work with inexperienced performers to find a naturalness in the work, but they can be too anxious to relax. Luckily I was able to work with some great performers who were able to relax into the roles and give an understated, natural performance.

There is a set of new work by artist Amalia Ulman showing in this exhibition that interests me particularly. Her Excellences & Perfections series appeared on instagram as what at first glance seemed to be the heavily curated selfies of a preening millennial. It was infact a scripted and well-planned performance of three consecutive tropes of young female internet celebrity existence.

“It’s more than a satire,” she explains. “I wanted to prove that femininity is a construction, and not something biological or inherent to any woman. Women understood the performance much faster than men. They were like, ‘We get it – and it’s very funny.’ ” What was the joke? “The joke was admitting how much work goes into being a woman and how being a woman is not a natural thing. It’s something you learn.”
Ulsan, A. quoted in Sooke, A. (2016) Is this the first Instagram Masterpiece? Sourced from http://www.telegraph.co.uk

With my next filing session I have some ideas around testing the performance of the actors to camera and around how much of themselves becomes present/not present. Hopefully there will be some curious outcomes.